After its release in 2010 Gonzos quickly became the ambassador for many online casinos because this 3D video slot is a symbol of excellence and has already entertained so many British players. There’s no doubt in our mind that Gonzos Quest is certainly one of best games ever released by NetEnt. Pioneer in its mechanic, the graphics and animations are captivating and will keep you on the edge of your seat as your watch the game symbols explode before your eyes. 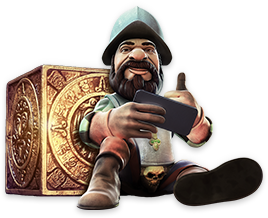 Everyday pleasure seekers and high rollers play this game, the minimum bet a player can place is 20p per spins and the maximum bet is £50. Gonzos Quest main game feature are avalanche symbols, multipliers and free spins. The game has 5-reels, 3-rows and 20 paylines. This video slot is considered to have a medium to high volatility and the RTP (return to player) is 96%. Which means that after playing 100 rounds at £1 each a players stand to be left with a theoretical balance of £96. Well, that is unless this player wins the jackpot which stands at a staggering 225,000 coins! You’ll often find Gonzos Quest in a prime position of desktop and mobile casino lobbies. They’re also many online casinos such as HelloCasino that like to reward players who claim their welcome package with free spins on this game. It’s worth knowing that HelloCasino third bonus includes 50 free spins on Gonzo’s Quest.

What are the main features of Gonzos Quest?

Gonzos Quest became popular because of the avalanche feature of the game and the increasing multipliers which are triggered after any consecutive wins. The increasing multiplier is available in both the base game and in the free spins bonus round. In the base, game players will have the chance to see their winnings being multiplied by x5 and in the free spins bonus rounds, players stand a chance to win a multiplier of x15 after 4 consecutive avalanches. It is possible to get 15 free spins which can be retriggered when 3 or more Scatters symbol lands on the reel. The numbers of free rounds you can trigger is limitless unlike other avalanche games like Davinci’s diamond where the maximum amount of free spins you can re-triggered is capped at 300. 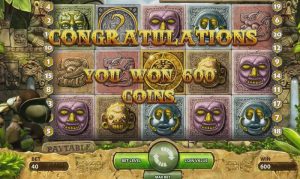 What are the best paying symbols?

Gonzos Quest video slot has 9 feature symbols which are inspired by the Chibchan civilisation which was the creator of the lost city of gold. A gold sun is the Scatter symbol and the Wild is represented by a grey stone with a gold question mark engraved on it. The other game symbols are all engraved masks which either represents the coronation ceremony of the Muisca culture. The dark blue mask is the best-paying symbol and when 5 align on a payline you’ll be rewarded 2,500 coins. The second best-paying symbol is a green mask and aligning 5 will give players 1,000 coins. The “brown monkey” like symbol is the third best-paying one and when 5 are on the same payline you’ll automatically receive 500 coins. The fourth symbol that pays the most is a purple mask and when 5 lands on a payline, players will receive 200 coins.
The most basic symbols in this game are less colorful than the other ones and seem to represent mythical animals. When 5 align players will receive anywhere between 50 to 100 coins.

Gonzos Quest has inspired many game developers since it was released. The avalanche or tumbling reels of this game is a feature that many players appreciate because it feels that the wins are more frequents. For this reasons, many game providers have tried to capitalise on Gonzos Quest success. They’re are a few games available in online casinos today that also have similar features and the same story line. But in good faith, the lost city of gold has also inspired many explorers. Some have often suspected that Davinci Dimonds by IGT was the original source of inspiration when it came to creating Gonzos Quest. Because this slot was one of the first which was released with an avalanche feature. Davinci Dimonds has classic game symbols which feature all of Leonardo’s masterpiece and of course as the game name suggest diamonds.

There are 25,000 coins up for grabs when you play this classic video slot and it is available to British players in both brick and mortar casinos and online ones. IGT is a bit cautious when releasing games in grey territories which mean that sadly Australian players are not able to play it legally. Jungle Jim by Microgaming is the latest replica of the famous NetEnt game. Inspired by the legend of an American explorer of 1900. This game also has an avalanche feature, multipliers and free spins which can be retriggered. The game symbols are however a bit different since they mainly are gemstones, but you can also find the occasional Chibchan inspiration in them too.

The jackpot of Jungle Jim stands at 92,000 coins which is still significantly lower than its rival. QuickSpins has also released their own avalanche game entitled Big Bad Wolf. Inspired by the children story this game has, like most QuickSpins games, superior graphics and very good animations. When you play this game your mission will be to save the 3 little pigs from the evil wolf but also to pocket the jackpot which stands at 75,000 coins.

Where can you play Gonzos Quest?

Once again players who wish to have a go at finding Eldorado the hidden city of gold are spoiled for choices. NetEnt games are widely available in online casinos and Gonzo has very few territories restriction. The best casino you can play Gonzos Quest at is HelloCasino since their welcome package includes 50 free spins on this game. If you’ve already claimed the full welcome package of HelloCasino why not signing up to InstaCasino, Leo Vegas or Shadowbet to also take advantage of their generous welcome offers! Best of luck in your quest and may your find gold at one of your preferred casino partners.