Raging Rhino is a game by WMS which was released in March 2014 for the land-based casino market. Shortly after its major success in Las Vegas, the game made its apparition in online casinos. This video slot has 6-reels, 4-rows and 4096 paylines. The RTP (return to player) is set at 95.91%. The main features of this popular safari theme game are free spins and multipliers. The maximum possible win on this slot is 250,000 coins. 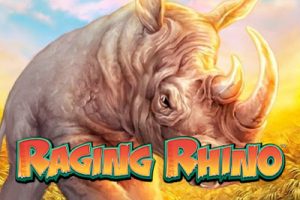 Since it was released, Raging Rhino has not lost its popularity with the players. In fact, this game is so popular than when placed in a top position of a casino lobby, many online casino managers have commented that it will receive more or less the same amount of game rounds at NetEnt hit game Guns N’ Roses, which is quite an achievements. There’s no doubt in our mind that the popularity of Raging Rhino and its growing fans base is due to the fact that this game can be played in brick and mortar casino, on a desktop and on a mobile device. The minimum bet players can place online on this video slot is 40p per spins and the maximum bet of £60. Because of its unique reel disposition, this game really stands out from other WMS titles. Some even say that since this slot was released, many online casino operators are lining up to integrate Williams Interactive games to lobbies and existing game portfolio.

What are the main features of Raging Rhino

They’re 2 main features in this game, free spins and multipliers. A neat thing about Raging Rhino is what when you start spinning, the reel will zoom in so that you have a better view of all symbols and paylines. The nicest feature of this game is that the numbers of free rounds you can win are based on the numbers of Scatters than whould have landed on the reel in the main game. The maximum number of free rounds you can trigger at once is 50 and to do so you’ll need 6 Scatter on the reel. While playing your free spins bonus rounds it is possible the trigger more free rounds when 2 or more diamonds lands on the reel, this will give you 5 more free rounds. The multiplier feature is only present in the free spins bonus and it attributed at random. It can vary from x2 and x3. It is possible to have more than one multiplier on a payline and it does happen frequently too which sure add to the winning potential. When more then one multiplier appears on the reel your winnings will be multiplied by the combined value of all multipliers. 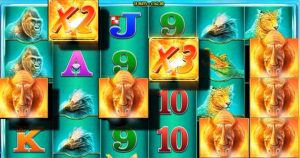 What are the best-paying symbols

Raging Rhino has 7 feature symbols. The Wild symbol is a tree with a bright sun shining behind and the Scatter symbol is a Diamond. In order to win in Raging Rhino, you will only need 2 matching symbols on a payline which different them most games where you’ll need 3 symbols. The best-paying symbol is the slot’s hero and when aligning 6 of them you’ll be rewarded 7.5 times your initial stake. The gorilla and leopard are the second-best paying symbols and when 6 align you’ll receive 6.25 times your initial bet. The alligator and the eagle also pay at equal value and when 6 align you’ll pocket 5 time your initial stake. Also present on the reel is the royal suit symbols Ace, King, Queen, Jack, Ten and Nine. These more basic game symbols can award anywhere between 4.75 times your initial bet to 2.5 times.

Safari themed game are very popular with online casino players. If you are looking to play a game that will make you dream of Africa and perhaps fund a trip there you should really consider playing Mega Moolah by Microgaming. Because this game has a progressive jackpot which can be won from a 25p per bet and up to £125 bet. This video lot has broken the record for the highest ever paid jackpot to a single player in October 2015. Indeeed, a lucky British player won the outstanding £13.2 million jackpot and chance his life from a 25p bet. If it’s the 4096 ways to win of Raging Rhino you’ve enjoyed you should consider playing Buffalo Blitz by PlayTech. This game offers the same reel disposition and the same amount of paylines. The RTP (return to player) is set at 95.96% and the maximum amount players can win is 1,500 coins which may seem a bit small but this game true potential lies in the free spins bonus round where players will have the chance to win up to 100 free spins.

Where can you play WMS games?

The best place to pay WMS games is without a doubt at Casumo. Their gamification API means that you’ll be able to join daily achievement races which can sometimes be held on Williams interactive titles. Casumo also offers a superb welcome package to new players who decide to join their world of adventure. New British players can claim £1,200 worth of bonuses and will receive 180 free spins when claiming the first welcome offer of 200% up to £50.

If you’ve already claimed Casumo’s welcome offer and you’re looking for another casino that offers WMS games and welcomes players with a great offer, you should join Leo Vegas. Not only this operator has a wide array of games but they have also won several awards for the excellence of their mobile platform. New players can claim 200% bonus up to £100 and will receive a bonus 200 free spins when making their first deposit.

Shadowbet also offers WMS games and new players who choose to signup are sure treated like Kings. Their welcome page is one of the best we’ve seen in online casinos! Players will get 1 year worth of frees spins which are wager free on top of 100% bonus up to £300.

Instacasino also offers Raging Rhino as part of their outstanding game portfolio. Players who join this new casino can claim £500 worth of bonuses. The first bonus players are eligible to it a 100% bonus up to £100 plus 10 RealSpins on Joker fire by PlayNgo.

If you too have Jungle fever make sure to join one of our casino partner for a great a cure!